San Diego, CA, USA – November 30, 2015 –HUYA Bioscience International, the leader in accelerating global development of China’s pharmaceutical innovations, today announced it has signed a Memorandum of Understanding with the Korea Drug Development Fund (KDDF) to foster collaboration between KDDF and HUYA with the ultimate goal of advancing Korean development and commercialization of healthcare products for the global market. 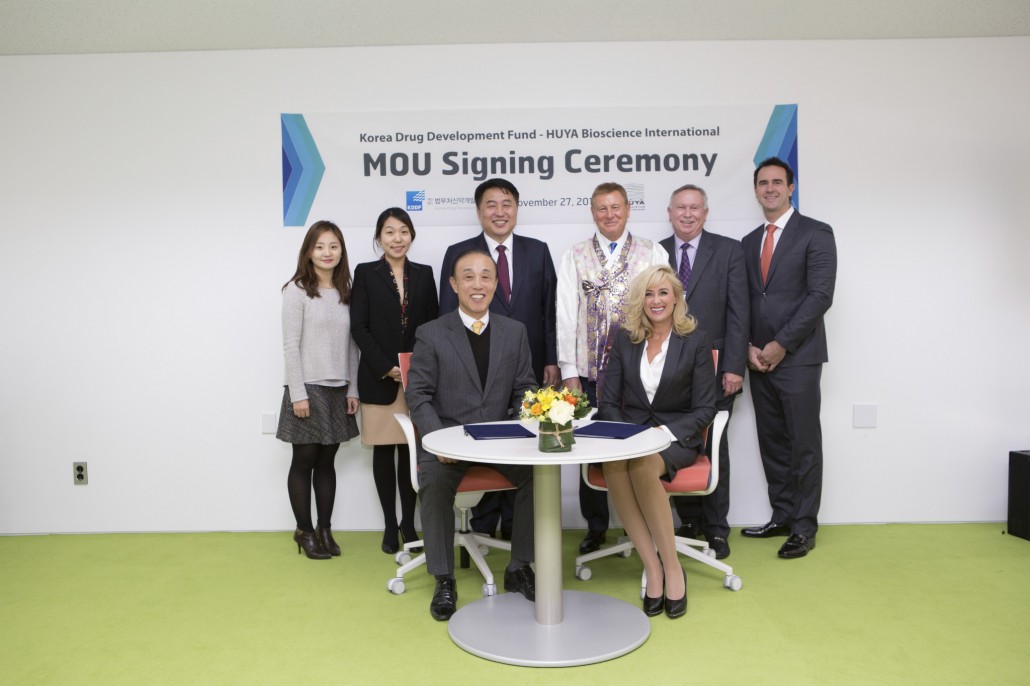 HUYA is the first company to have recognized China’s potential as an important source of new innovative preclinical and clinical stage compounds. The company advances the development and value creation for China-sourced novel biopharmaceutical compounds in worldwide markets. HUYA has already established more than 100 agreements with leading universities and research institutes throughout China as a pioneer in the licensing of both preclinical and clinical stage compounds from the country. Now the company will expand that effort to include Korea in partnership with the KDDF.

“This partnership is particularly exciting given Korea’s emerging biotechnology products coupled with HUYA’s mission and track record in bringing drug candidates from Asia for global development, said Mireille Gillings, Ph.D., CEO of HUYA. “We look forward to great success from this alliance in the coming years.” “We are very pleased about working with the KDDF adding to our activities in China and Japan” said Clem Gingras CTO and COO of Asia. “We now have strategic alliances in all three countries involved in the Tripartite Cooperation Treaty.”

HUYA Bioscience International is the leader in enabling and accelerating the global development of novel biopharmaceutical product opportunities originating in China. HUYA has established extensive collaborations with Chinese biopharmaceutical, academic and commercial organizations to speed development and value creation in worldwide markets for China-sourced product candidates. With the largest Chinese compound portfolio covering all therapeutic areas, HUYA has emerged as the partner-of-choice for building and maximizing the value of biopharmaceutical innovation in China. HUYA has offices in the U.S., Japan and eight strategic locations across China, with joint headquarters in San Diego and Shanghai. With the largest team of scientists working with Chinese innovators, HUYA identifies and advances promising drug candidates globally. Earlier this year, HUYA was named the winner of a Stevie® Award in the Health Products & Services and Pharmaceuticals category in the Asia-Pacific Stevie Awards.
www.huyabio.com

Signaling a new change in government-funded strategy, the KDDF was established in 2011 and operates through close management of development projects, linking grant support to the achievement of milestone-based research objectives. With a budget of US$1 billion, including private matching funds, the KDDF is an unparalleled response to the clinical demands of the 21st century. This investment in the country’s future is aimed at nurturing success that is initially driven by government and then transformed into a sustainable growth engine through valued researchers and industry partners. For more information, please visit http://www.kddf.org